South Australia offers clean, uncrowded and temperate waters for diving – among the most biologically diverse in the world.

Head down to Port Noarlunga, the most laid back coastal suburb of Adelaide and dive in the warm temperate marine waters of South Australia! Take The Dive Shack’s leafy sea dragon tour for a close encounter with a leafy sea dragon or travel up to Whyalla for the spawning season of the Giant Australian Cuttlefish!

South Australia offers a wonderful variety of diving options with an extreme diversity of life that comes with it. There are a lot of pristine reefs to discover and many historic wrecks to explore. Jetty dives are prolific and varied and secluded bays are teaming with life. You’ll find iconic species such as the Australian sea lions, brown fur seals, giant Australian cuttlefish and red rock lobster, plus many other charismatic or visually appealing species, including the blue ringed octopus, the port jackson shark and the red rock lobster, which all live comfortably within recreational diving limits. 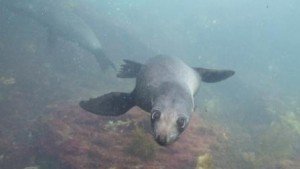 With an estimated population of just over 13.500, the Australian Sea Lion is one of the rarest species of its kind and is protected under numerous independently enacted state laws. As two-thirds of their population has made South Australia their home, you are offered many chances to spot them in the water. Dive into an unforgettable experience as they swim extremely close to you and watch them mimic your moves while they propel themselves through the water! 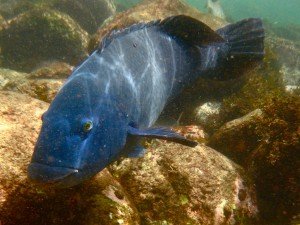 This large slow swimming fish looks like the true gropers of tropical waters. It has big round paddle fins, peg-like teeth an a green-blue or blue colour. They usually come right up to you to have a look as tend to be very inquisitive. Both the Western and the Eastern Blue Groper occur in South Australia. You can tell them apart by the yellow spots that the Western form has between it’s eyes as opposed to the Eastern form having yellow lines around the eyes. They can both grow up to about a meter (3 feet), with maximum lengths of 1.6 meter (5 feet) for the Western Blue Groper. 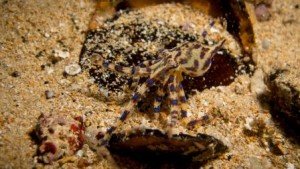 The Blue Ringed Octopus is one of South Australia’s most venomous animals. They can be recognized by their characteristic blue and black rings and yellowish skin. They hunt small crabs and shrimp, and may bite attackers (including humans) if provoked, so it’s best to stay clear and avoid contact at all times. They camouflage themselves quite well until provoked, at which point they change color rapidly, becoming bright yellow with their blue rings flashing. You can often spot this beautiful creature during night dives at many of the South Australian dive spots. During the day they usually hide in small caves and other small spaces such as bottles. 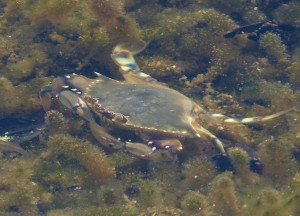 The Blue Swimmer Crab stay buried under sand or mud most of the time, but when hey come out (usually during the night), you can easily recognize them by their bright blue colour with white spots (males) or a green/brownish colour (females). They usually come out to feed during high tide to feed on various organisms such as bivalves, fish and macroalgae. They are excellent swimmers, largely due to a pair of flattened legs that resemble paddles. They are very territorial and will move into defense-position when you hover above them. They can grow up to approximately 20 cm (8 inch) in width. 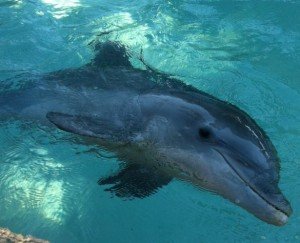 The most well-known oceanic dolphin is the bottlenose dolphin. They usually live in pods of about 10 to 30 members, can grow up to about 2.7 meters and have sleek, streamlined, fusiform bodies. In contradication to humans, bottlenose dolphins can see and hear very well both on the surface and underwater. Don’t be surprised to see them while boat diving in South Australia, as we very often do. You can usually see them leaping out of the water or hear their typical whistles from a mile away! 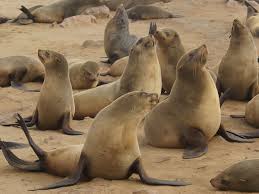 The Brown Fur Seal, also known as the Australian Fur Seal, have a large broad head and a pointed snout. Males are brown to dark gray with a darker mane and a light underside, where females are gray to light brown with a dark underside and light throat. They can grow up to about 1.7 meters (5 feet). They are very inquisitive and friendly when in the water and will often accompany you when you’re diving near them. They will swim around you for periods of several minutes at a time, even at the maximum depths of recreational scuba diving! 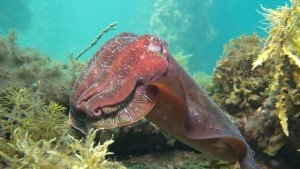 If you’re in South Australia between May and September, contact The Dive Shack for a weekend or a day tour to dive (or snorkel) with literally thousands of the world’s largest species of cuttlefish during their breeding season. Breeding takes place right here in South Australia, where the males (that can grow up to 50 cm.!) abandon their normal cryptic coloring and set out to dazzle the females by adopting rapidly changing bright colors and striking patterns! 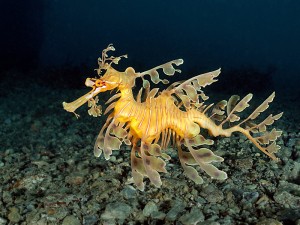 South Australia is world famous as a diving destination because of it’s marine emblem: The Leafy Sea Dragon. The name of the Leafy Sea Dragon is derived from it’s magical appearance, that serves as perfect camouflage in it’s natural habitat, the southern coasts of Australia. They are larger than most sea horses, growing to about 20 – 24 cm (8 – 10 inch) and feed on plankton and small crustaceans. Go on a Leafy Sea Dragon Tour with The and explore one of the best spots in the world to see this amazing creature! 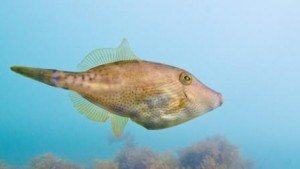 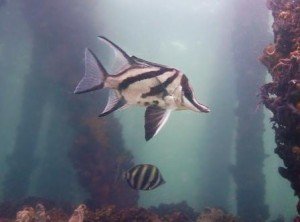 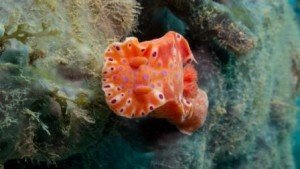 Nudibranchs are often casually called “sea slugs”. They are very numerous in terms of species and are often very attactive and noticeable. Because of their often very bright colouring they can usually be found quite easily. However, with their size ranging from only 20 to 600 mm. (0.79 to 24 inch) that obviously isn’t always the case. The intense and bright coloured ones found in South Australian water, warn other species with their colours that they are very distasteful or poisonous (but they are in no way dangerous for humans). 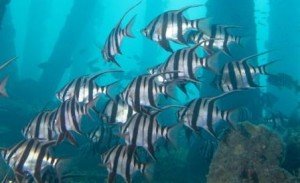 Often confused with boarfisheds, Old Wives can be distinguished by the two completely
seperated dorsal fins, that are joined together in the Boarfish group. The habit of grinding its teeth when caught resembles the grumblings of and ‘olf wife’, so told by many ‘old fishermen’. Commonly found on in small to large schools on coastal reefs, seaweed areas and jetties in many areas of South Australia. They can grow up to about 30 cm (1 foot). Please be aware of their poisonous dorsal spines that are capable of inflicting a painful wound.

The male Ornate Cowfish has a prominent bump in the front of the eye and blue centred black spots on its yellow body. The female has a deeper body and reddish, black and white stripes. Both sexes have narrower spines in comparison with Shaws Cowfish. They can grow up to about 15 cm. (6 inch) in length and are often found in sheltered reefs or jetties and more often near seagrass beds. 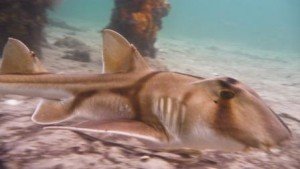 These harmless bullhead sharks are often found on the reefs all around South Australia. It has a relatively large head with prominent forehead ridges and dark brown harness-like markings on a lighter grey-brown body. They stay quite small, with maximum lengths recorded of about 1.7 meters (5.5 feet). They are a migratory species that travels south in the summer and returns north to breed in the winter months. It usually lives in less than 100 metres (330 feet) and can be found on stone settings on the bottom where it feeds. Since the shark is nocturnal, these sharks are usually seen in low resistance areas such as caves and overhangs during the day.

The Red Rock Lobster, also known as the Southern Rock Lobster or the Spiny Rock Lobster, is one of the world’s rarest and commercially most sought after crustaceans. They live in and around the South Australian reefs at depths ranging from 5 to 275 meters (16 to 900 feet). They usually have a dark red or orange colour with yellow abdomens and can weigh up to about 5 kg.! They are usually found crawling on the bottom or swimming backwards by flexing their tail. Their antenna are sensitive to water vibrations and as soon as you approach them they will withdraw into their den. 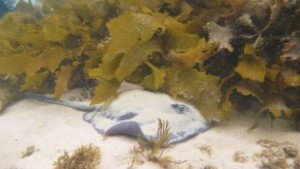 The Smooth or Short-tail Stingray is one of the many species that is often referred to as Bull Rays. It can have a span width of up to 2 meters (6 feet) and it can grow up to 4.3 meters (14 feet) in length. It is plain with a bluntly angular snout and pectoral disc with round tips, a thick-based tail shorter than the body and a small upper and a long lower caudal finfold. It is often grey-brown or bluish-grey with a row of small, pale blue spots at each pectoral fin base, and white ventrally. 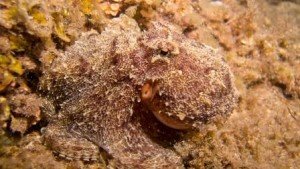 This beautiful creature has an arm span of up to 50 cm. (20 inch) with delicate long arms joined at the base by webbing and studded with small suckers. Like other octopuses it can change its form and petterns on its body quite readily, but it’s usually seen in it’s pale orange or dark red form. Most divers may miss this octopus as it buries itself under the sand during the day, venturing out at night to feed. It sometimes can be seen drawing its body into a long cigar-like shape and walking around. It is usually seen on sandy bottoms or on seagrass beds, down to about 50 meters (165 feet). 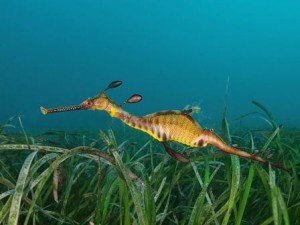 The other sea dragon that can be found in the southern regions of Australia is the Weedy Sea Dragon. They are often found around jetties and moving among seaweed beds. They can be seen as the big brother of the Leafy Sea Dragon as they can grow up to about 50 cm. (20 inch) in length. They are named for the weed-like projections on their bodies. They are often found in seaweed beds and around jetties all over South Australia. 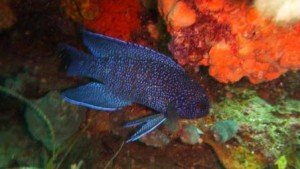 This brilliant deep blue fish is easily recognizable as it is one of the most spectacular residents of deeper crevices under larger rocky reefs and drop-offs. They can often be found when diving one of the many wrecks of South Australia. It is generally solitary and as a slow swimmer, it makes small loops from deep within crevices. It can grow up to about 35 cm. 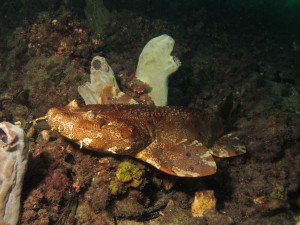 The wobbegong shark is a bottom-dewlling creature that spends most of the day resting
on the sea floor. They usually do not grow larger than 2 (6.6 feet) metres, but the spotted wobbegong can grow to about 3 meters (10 feet). Because of their well camouflaged patterns, wobbegongs are typical ambush predators and catch small fish. Wobbegons are generally not dangerous for humans, unless they are provoked. Divers who poke or touch them have been bitten, as they can easily bite a hand that is holding on to their tail because of their flexibility. It’s best to stay clear and avoid contact at all times.